Meet Amjad – A Rickshaw Driver Who Worked To Educate His 6 Daughters And Today One Of Them Goes To IBA!

Recently, a resident of Karachi and a rickshaw driver by profession made Pakistanis emotional over the internet. Amjad, a rickshaw driver whose main source of earning is to give pick and drop services in his rickshaw is educating his daughters and showing the world how daughters should actually be treated. Having only daughters, Amjad never felt disappointed, in fact, he is proud of his daughter’s accomplishments. This is what he has to say:

Here’s the tweet that caught everyone’s attention on social media! 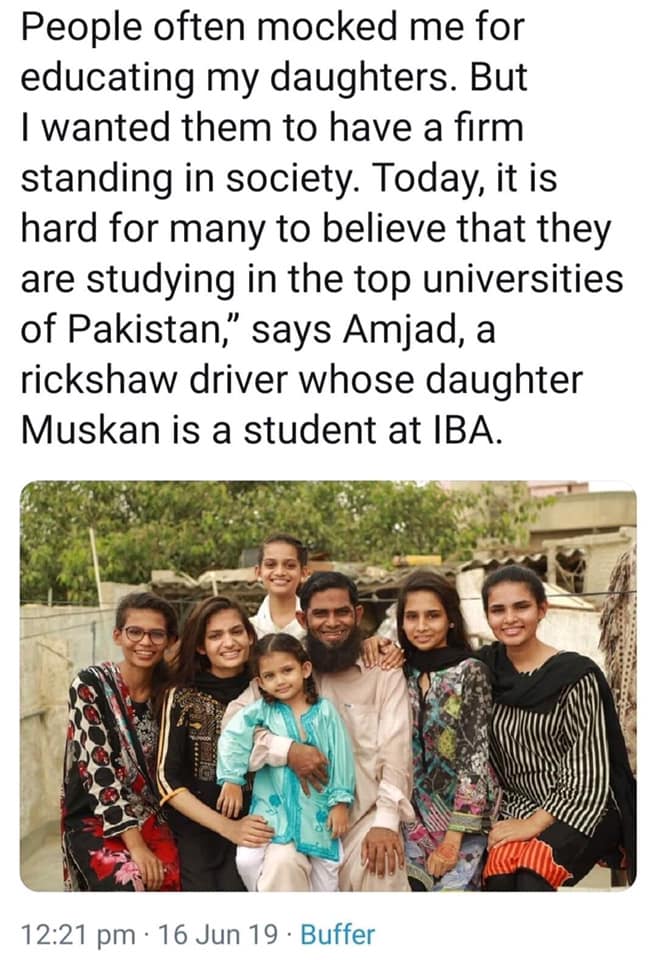 Talking to a local publisher, Amjad said, “It wasn’t easy but I had decided that I’ll make it happen. People often mocked and criticized me that girls are bound to get married and move out, stop wasting your hard earned money on your daughters. Today, by the grace of Allah, my daughters are studying in the top elite universities of Pakistan. Muskan, one of my daughters is currently studying in Insititute of Business Administration (IBA) which is in the list of top business schools across the country. I’m a proud father, Alhumdulillah!”, Amjad added.

Amad surely set an example for the whole world. The misconceptions that are seeded in desi households are purely bogus. Daughters are considered to be Allah’s blessing and calling them a burden just showcases a person’s low-level mentality. May Allah gives more strength to Amjad and may his daughters make their father proud in the future.